A VR based control system for monitoring and controlling articulated robotic inspection arm (50 kg payload at 2.2m reach) has been developed and tested successfully.
In addition to the domestic developments, IPR as part of international collaboration has completed and delivered remote handling task agreements with ITER-IO, France and JET, UK

AI with EEG signals for prediction of seizures, in collaboration with AIIMS Delhi.

Use of image processing and AI in automation of experiments at IPR and external agencies.

Other potential areas of AI application like hand movement, gesture recognition,  big data analysis are part of other collaborations.
DeepCXR
Institute of Plasma Research developed AI tool for detection of TB and other lung disease using Chest X-ray, was tested on limited data set and therefore the entire range of variables have not been covered.
MOU signed & training of tool initiated on the  data of culture confirmed X-rays from previous surveys which includes data from four zones of India.
At present tools are in advanced stage of testing with numerous images from various sources. This work is being carried out in collaboration with Civil Hospital, Ahmedabad, ICMR, head quarter Delhi, NIRT, Chennai and other participating institutes/medical colleges in India. The software has the capability of processing more than 250 images in 30 mins.
A central website has been developed at ICMR Delhi https://tb.ai.icmr.org.in/ai4tb/
A pre processing software was developed by IPR and training was given to all participant institutes .
For our software DeepCXR we need digital CXR(chest x-ray). For this purpose a prototype of digitizer of chest X-rays was developed and tested. 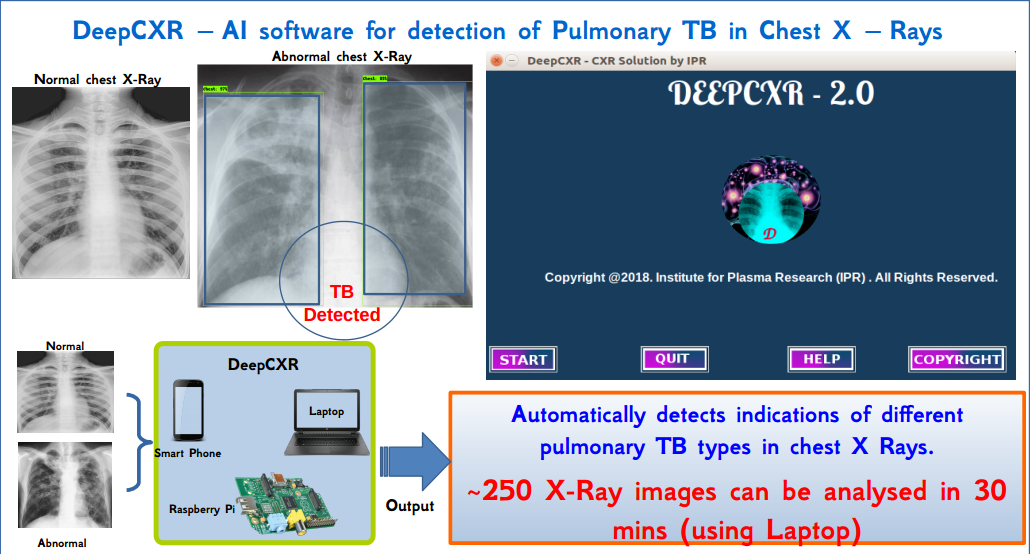 AIBacilli
This is another AI software developed at IPR for automated detection of single/multiple mycobacillus in sputum smear test. This AI based Software uses AI based technique of Object Detection. Software development together with the relevent Hardware automation is being carried out to simplify the current practice. The work is being carried out in collaboration with Civil Hospital, Ahmedabad.
The softwares are capable of running on CPU/GPU/ARM devices.


AI tools on the top of existing security systems are designed, developed and deployed for 24 x 7 monitoring of critical areas/lab spaces etc. GUI interface, data storage, network connectivity forms the part of the system. We have trained,tested and validated a CNN model which determines the object of interest (human) in live CCTV frames.


Blockchain Technology: Web 3.0 based advanced encryption technologies are integrated with current software to leverage the benefits of decentralization. The software is designed to interact with public blockchain nodes, stores the encrypted values in block of defined pre-defined contract to be retrieved at later date. The software has numerous applications like govt data repository, certificates, digital health records etc.


Introduction Visible   image   acquisition   is   one   of   the   activities   during   Plasma   experiments   to diagnose Tokamak Plasma. Due to the presence of strong magnetic fields in and around Tokamak, the camera cannot be directly kept inside the Tokamak. For imaging purpose where camera can’t be used directly, optical fiber bundle is used with camera to capture image. The image captured using optical fibre bundle has some noise, which is referred as Honeycomb structure. Software package developed for removal of honeycomb structure. The executable software package is capable to read from USB/IP camera or from stored video file.
A prototype for image processing based feedback as required for experimental setups is also being developed and tested.
Image processing of plasma images for boundary extraction (from  SST-1 imaging diagnostic)

Remote operations require the accurate perception of a dynamic environment. The aim of this facility is to give the operators the same unrestricted knowledge of the task scene as would be available if they were physically located in the remote environment.

The VR facility is seamlessly compatible with various design and modelling software like CATIA V5, Solidworks, 3D via composer etc. The users can load the 3D models of the machines/systems in the VR facility and it can be instantly viewed as 3D immersive models using the stereoscopic glasses and feel as if they are actually present in the virtual environment.

Plasma facing components (PFCs) in a tokamak are subjected to high heat & particle fluxes, which damages them over time. Hence, the periodic inspection is essential for health monitoring of PFCs in between plasma experiments, and this must be done without breaking the ultra-high vacuum.

An In-Vessel Inspection System(IVIS) has been developed at IPR to perform the remote in-service inspection inside toroidal vacuum vessel (VV). The IVIS is compatible to 1e-7 mbar vacuum and 100°C temperature.

The IVIS consists of a 6-DOF articulated arm with reach up to 4m, mounted on a linear guide and a vacuum storage chamber (VSC).

The IVIS system is controlled remotely using virtual reality based monitoring and control. During initial testing, position repeatability of ±2mm has been achieved.

Hyper-redundant manipulators are an alternative to serial manipulators that can be used for inspection and maintenance in constrained location.

It is a cable driven long reach arm, having dexterity similar to an elephant trunk deployable in narrow spaces, challenging environments. They are highly suitable for inspections in tokamak environment, where the robotic systems need to have multiple degrees of freedom, light weight, fast deployment and retrieval mechanism and high dexterity.

In conventional robots, each link moves in a 2D plane that is normal to its actuation axis that is controlled by a motor-gearbox assembly. Thus the number of DOFs for a conventional robot is defined by the number of joints. Hyper-redundant robots, on the other hand, have joints that are defined by a spherical workspace – similar to a ball bearing, and the actuation is controlled using cables or cables. As a result, each joint is not restricted to a 2D plane and can actuate the in a 3D workspace.

IPR has designed and developed a 15 DOF HyRIS system that can be used for inspection applications the challenging environment. The system has been  successfully tested.
4. Indigenous development of Haptic master arm for tele-manipulation

To execute dynamic RH tasks safely, a ‘man-in-loop’ architecture is typically followed. A haptic master arm with force feedback in all 6 DOFs is being developed for operator level controlling of the robotic manipulators.

It is a 6 axis master arm comprises of back drivable actuators and associated control system to generate proportional forces/ torques on the operator’s hands as experienced by the slave robot joints.

The system is extremely useful to minimize the time for planning the operation sequences and testing in a mock up facility. This system can also be used for the training of the operators and for demonstration of the operations during mock up trials.

The operator can interact and drive the robot using a mechanical handle with a coupling of the forces between the operator and the slave arm. As the system is sensitive to the external forces, it achieves higher level of safety and there is a reduced risk to damage the interfacing components. The initial test results show high precision and accuracy with a low latency.
Achievements
1) Successfully Established of 3 sided fully immersive Cave Automatic Virtual Environment (CAVE) VR facility at IPR
2) In-Vessel Inspection (IVIS) System is First UHV compatible 06 DOF articulated arm in India.
3) A VR based control system for monitoring and controlling articulated robotic inspection arm (50 kg payload at 2.2m reach) has been developed and tested successfully
In addition to the domestic developments, IPR as part of international collaboration has completed and delivered remote handling task agreements with ITER-IO, France and JET, UK