After 25 years of successful operation of ADITYA tokamak (~ 30,000 discharges) in a circular poloidal ring limiter configuration, it has been upgraded to a tokamak named ADITYA Upgrade (ADITYA-U) to realize the shaped-plasma operations in an open diverter configurations. The upgradation was conceptualized in the year 2014 and the ADITYA tokamak had been dismantled to its base level in the year 2015. The ADITYA-U tokamak construction was completed in the year 2016 and the first plasma was achieved in December 2016.
The ADITYA-U tokamak is a medium-size air-core tokamak with a major radius of 0.75me and a minor radius (limiter radius) of 0.25 m and maximum toroidal magnetic field of 1.5 T. It has a toroidal belt limiters and two quarter poloidal limiters at two toroidal locations made up of graphite. The ADITYA-U is designed to produce circular plasmas with plasma current ~ 150 – 250 kA, plasma duration of ~ 250 – 350 ms with a chord average electron density in the range of 1 – 5 x 10^19 per meter cube and electron temperature ~ 300 eV – 1000 eV. In addition, it is designed to achieve shaped plasmas with plasma current ~ 100 – 150 kA, elongation (k) ~ 1.1 - 1.2 and triangularity ~ 0.45. 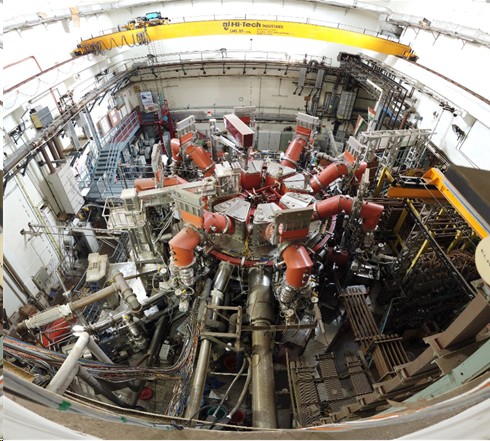 Steady-State Superconducting Tokamak (SST-1) is a medium size superconducting tokamak, which has been designed and built to study the physics of the plasma processes in tokamak under steady-state conditions. In recent times the experimental campaign has been extended to a record 15 days with 300 plasma shots, with plasma pulse durations upto 650 milliseconds, 30% higher than the best achieved ever before, and better reproducibility of plasma parameters. This became possible due to improvement of the initial magnetic field null inside the vacuum vessel, permitting higher gas fill pressures, in turn allowing plasma creation with a limited pulse of electron cyclotron heating at 42 GHz. The improved plasma density also permitted long-duration current drive using injected power at 3.7 GHz, which was not hitherto possible due to a low-quality plasma near the wave launcher. Also for the first time in SST-1, the three frequency ranges used for plasma heating (tens of MHz, few GHz, tens of GHz) were applied simultaneously. Improved cryo-insulation has permitted production of liquid Helium from the cryo-plant in addition to coil cooling, which will now allow cooling of current leads. 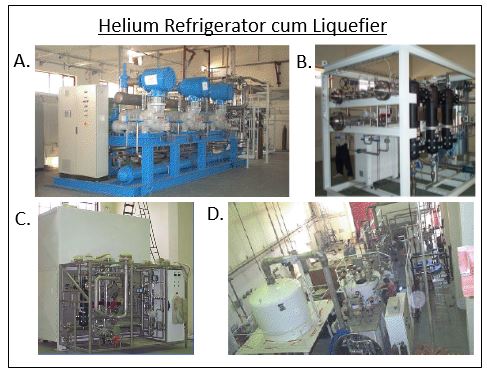 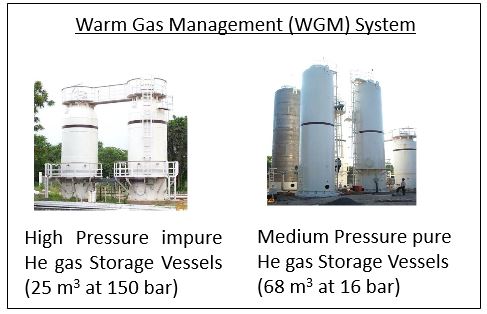 The HRL plant capacity is measured in various modes (i. e.  R, L & R+L modes) and found that the            capacity is intact to the same during site acceptance test of HRL.

Indigenous developments of Current Leads for superconducting magnets:
Introduction : Any superconducting (SC) fusion device or SST-1 like machine demands extensive use of SC magnets, which excited at several kA through current leads (CLs) only. Even, they may consume ~ 25% of total operational costs  of such fusion reactors.
Current Lead (CL) is an optimal device, which bridges a gap between Power supply (at room temperature) and NbTi superconducting coils at cryogenic temperatures (~ 4.5 K in SST-1).  10 kA rated vapour cooled current leads (VCCLS) have been designed, indigenously developed and tested under cryogenic conditions at the full rated current along with long pulse operations to fulfil the SST-1 requirements. Subsequently, total 10 pairs of VCCLs manufactured in-house at IPR for the operation of TF (toroidal field) and PF (poloidal field) coils. Currently, 01 pair is installed in the Current Feeder System to charge  all 16 TF Magnets while 02 pairs for PF-3 magnets. The heat exchanger is one of the major section of the CL that is a bundle of Cu rods being accommodated by concentric stainless steel tube to allow the cryogen helium to have better heat transfer.


Recent Developments
An approximately 50% of 1.3 kW power of Helium Refrigerator cum Liquefier (HRL) commissioned at IPR is consumed only by existing VCCLs. With the advancement of technology, this significant capacity can be saved with the introduction of High Temperature Superconductor (HTS) instead of Nb-Ti. BISCO tapes as an HTS is selected due to its high critical temperature (110 K) i.e. above the boiling temperature of liquid nitrogen. Accordingly, liquid nitrogen will be utilized to cool this part as very economical solution instead of liquid helium. HTS CLs offer considerable 3 to 4 times economic benefit in the operation of superconducting magnets/fusion devices to achieve higher field. As a development activity, the design of HTS CL initiated at IPR and 3.3 kA rated one pair of HTS prototype CL was initially manufactured in the association with Indian Industry.
Therefore:

IPR has developed new soldering technique to join NbTi-Cu-MgB2 as well as MgB2-Cu-MgB2 using Cu electro-polishing. Use of Monel as a sheath material in MgB2 wires poses a major challenge while fabricating SC joints due to its low wettability and flow ability with solder material. To tackle this issue, we utilized Cu electroplating technique to ease fabrication of MgB2– NbTi: Cu as well as HTS: Cu - MgB2 joints. Coating MgB2  wires with Cu not only improves thermal and electrical stability but also gives rise to better adhesion and strength by enhancing the wettability and flow ability of solder material.

12 kA / 16 V Switch Mode Power Supply (SMPS) was used to charge the HTS current leads to its desire values of 3.3 kA. A PLC based process and DAQ system based on SCADA were implemented along with GUI to monitor the real time parameters during the test.

During the test, all the sub-systems Viz. vacuum systems, cryogenic system, instrumentation and control as well as DAQ system along with the SMPS have successfully demonstrated their reliable operation.
Indigenous developments of Current Leads for Superconducting magnets
Achievements
VCCLs

The VCCLs have also been charged TF coils up to 4.7 kA using cold helium gas instead of liquid state.

The VCCLs have been successfully performing so far in total ~ 27th SST-1 campaigns since last 10 years.
HTS CLs

With little modifications, it is envisaged that the same experiment may be repeated to establish the performance up         to 3.3 kA to its original designed values.
Recent Publications
Report on Current Feeder System (CFS) for installation of PF3 Current Leads (CLs) along with associated Cryogenic Network towards producing shaped plasma in SST-1 [Technical Report: IPR/TR-610/2021, Jan 2021]
Atul Garg, H. Nimavat, P. Shah, R. Panchal, Srikanth L.N., G. Purwar, P. Biswas, H. Patel, F.S. Pathan, P. Thankey, D. Sonara, D. Christian, A. Panchal, N. Kumar, A. Prakash, U. Prasad, V.L. Tanna, B.R. Doshi, R. Srinivasan and D. Raju
Multichannel superinsulated Helium transfer line
Introduction: A multichannel superinsulated Helium transfer line has been developed in house and installed at SST-1 Cryogenic facility. This cryogenic transfer line is developed in order to have a dedicated supply line and return line of liquid helium for PF-3 and PF-5 coils. The length of this transfer line is approximately 10m which was integrated with flow distribution box of SST-1 Cryogenics facility and with port no 13 bottom of SST-1 tokamak at the other end. The internal process lines of the transfer line are wrapped with Multi layer insulation of optimum layer density and supported with G-10 at appropriate distance in order to have optimum heat leak. The transfer line will be under dynamic vacuum during operation in order to reduce the heat load due to residual gas conduction. Smooth bends are used wherever necessary and cryogenic compatible flexible hoses are used at both ends of the process pipes for connecting with interfacing systems.

The performance in terms of helium leak tightness at RT conditions as well as at 77 K were found satisfactory.

Using this line almost 10 cycles of cool down and warm up completed successfully.

The power supply is fully modular and has N+1 redundancy.

Each sub-converter act as independent current source with rating of 1714 A, 16 VDC.

Power supply used for testing one pair of 3.3 kA rated prototype hybrid current leads having Di-BSCCO
as High Temperature Superconductors (HTS) and copper heat exchanger in September 2016.
Approximately, 950 A current had provided by this power supply.

Recently, an improvised 3.3 kA rated prototype hybrid current leads having Di-BSCCO HTS is tested
up to 1,000 A using the power supply in February 2022.

During all these low temperature experiments, the power supply work satisfactorily.


Read more >>
A Small-Scale Spherical Tokamak (SSST) is under construction to study the plasma initiation and non-inductive current drive. This will help to realize a volumetric neutron source. The project is expected to go for plasma opertation in the 2nd Qtr. 2022.